A terrifying new super-drone could soon be making us lose our minds – literally.

Sources say the H+ #4711 prototype – nicknamed Transcendence after the Johnny Depp movie in which a dead scientist’s consciousness is uploaded to a quantum computer – is the first truly Transhuman (also known as H+) weapon of war.

Transcendence is currently flying a series of controversial test missions at the recently outed remote US military facility known as Area 6, on the Yucca flat, in Nevada.

A military security insider – speaking exclusively to THE SPOKANE WORD – claims US service personnel are being used as unwitting guinea pigs in the tests, which have been running for more than 3 months.

The goal is to collect information directly from subjects’ brains utilising the highly-classified quantum uplink carried aloft by Transcendence.

No information is available on the success of the tests themselves but our source warns of terrifying side effects.

“Transcendence is putting out god only knows how much radiation, or whatever,” the source cautions, “and servicemen and women are being subjected to extreme exposure day after day. 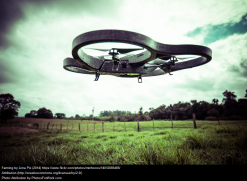 “The aim is to – remotely, literally – scour a target’s mind and upload the information.

“It’s like scooping out a melon and just about as delicate.

“The collateral damage from Transcendence is going to be horrendous.”

“If someone’s brain gets fried during one of the tests, they just fly in the next so-called volunteer,” warns the source.

The existence of super secret Area 6 was only recently revealed by chance on Google Earth.

Operated by the National Nuclear Security Administration, Area 6 is at the forefront of US military counter-terrorism development.

It has completely restricted airspace and is routinely used by government agencies to test unmanned aircraft and other weaponry.

The Transcendence program and any kind of testing regime relating to it have been officially denied.